On Thursday 23 August 2018, Hornsby Council held its community forum for B Ward at the Pennant Hills Bowling Club. Councillors Browne, Nicita, Heyde and McIntosh, as well as Mayor Ruddock attended this forum, and answered questions from residents. 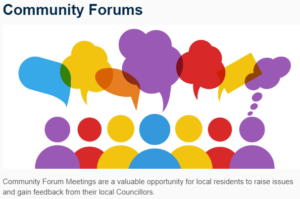 Community Forum Meetings are a valuable opportunity for local residents to raise issues and gain feedback from their local Councillors. They are a golden opportunity to put your views on what Council and its representatives should be doing for us their electors in an informal meeting.

Over the past twelve months the Pennant Hills Trust has received many emails, casual encounters and phone calls from members raising issues important to them.

Some of the most prominent issues are:

All these issues have one thing in common- the lack of a community focussed visionary plan for Pennant Hills.

The Trust has been lobbying Council for over 15 years to develop such a plan for Pennant Hills. So far to no avail.

Throughout 2018 the Trust has continued to advocate for work to commence on the long-awaited Pennant Hills master plan.

We have published our “vision for Pennant Hills“, issued supplementary notes, met with nearly all Councillors to discuss our vision and been gratified with the support we have received. I’m sure all of us accept the future for Pennant Hills is more housing and different styles of housing to cope with population growth. The Trust wishes above all to see this development proceed in the framework of a broad community centred place plan.

We understand that HSC has recently employed additional staff to focus on strategic planning and Councillors are now discussing their priorities for the next year. We have requested a meeting with our Mayor and relevant staff to reconfirm the importance we place on this initiative.

We remember the support our Mayor and Ward B Councillors offered for this initiative during the public meeting we held for candidates prior to the last Local Government elections. We also appreciate the support from Ward C Councillors, especially Councillor Emma Heyde noting key parts of Pennant Hills are in Ward C.

Our Mayor has said there will be no new housing targets set for the Shire until after the next State election in March 2019. As we all know that date is just around the corner. The Trust suggests that now is the time to move from support to commitment of resources so concrete progress can be made in advance of any new housing targets for our community. We recognise Council’s preference is that the next stage of additional housing be accommodated around Hornsby CBD. We would suggest this buys some time for detailed place planning for Pennant Hills to commence now and proceed with a structured methodology involving ongoing community consultation. We would further suggest that if only limited resources can be committed to this task that work commence anyway so the broad planning principles, vision and coherence with State Government housing, social and infrastructure initiatives will be established as soon as possible.

We feel there is a recognition among our Councillors that unless Council does develop such a plan in the very near future we will be swamped by Developers putting forward their own “plans” for our community. Remember the old but true saying “failure to plan is to plan to fail”. Let’s not continue the failures of past Councils.

The Trust looks forward to seeing as many of our members as possible attend this community forum and debating with Councillors their views on what would make Pennant Hills a better place in which to live, work, shop and play. For its part, the Trust will continue to work constructively with our elected Councillors to achieve good outcomes for all residents.