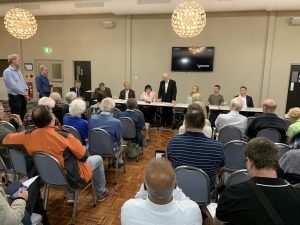 On 18 October our Pennant Hills District Civic Trust held its AGM in the Pennant Hills Bowling Club to hear the President’s report on t he past year and plans for the next, elect the committee for 2019 and hear our guest speaker Steven Head, General Manager of HSC, outline the many works Council has in train to improve  liveability in the Shire. 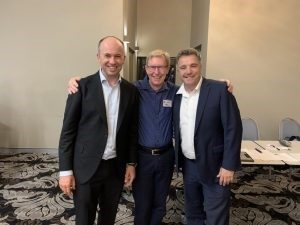 Many members attended as well as our State member Matt Kean, Mayor Philip Ruddock, Councillors Janelle McIntosh, Emma Heyde, Joe Nicita, Robert Browne, Vince del’ Gallego, Nathan Tilbury. We appreciate the support we have from our Councillors and in lively discussions about commuter parking, promises of less congestion on our roads after NorthConnex is opened, accelerated tree planting and managing  sustainable development within the Shire we saw the Trust, its members and Council are substantially on the same page.

In delivering the President’s review of 2018 Noel Oxley outlined the major issues considered by the Trust and its committee as:

Continuing to work with the community on a new bike track from Pennant Hills to Epping.  Finding a route which provides a safe, relatively level path is a real challenge given the hilly nature of our suburbs

Strongly advocating for a visionary “place plan” to guide the future of Pennant Hills. We want a community focused, place-based vision for Pennant Hills considering:

Our issues for the coming year are:

We communicate with our members via

The Trust only functions well when it calls on the knowledge, expertise, enthusiasm and ideas of its members. So, my call to our residents in Pennant Hills is to become involved in whatever way you can, either by becoming a member, encouraging your friends and neighbours to join, joining the committee, making comment on issues which excite your  passion, suggesting issues which the Trust should engage on.

The committee looks forward to another busy year, which with inputs from many of our members will result in Pennant Hills continuing to be the place to be in 2019.