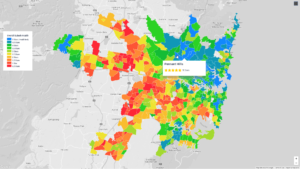 Point Piper may be Sydney’s most prestigious postcode, but when it comes to health opportunities, Pennant Hills has the edge. That’s according to a new study comparing Sydney’s 569 suburbs based on 10 factors that either help or hinder a healthy lifestyle, including walkability, open space, access to hospitals, alcohol and fast food. With high scores across most indicators, suburbs north of the harbour bridge reign supreme, according to the study authored by Deloitte Access Economics and Tract Consultants. More concerning is the clear divide of health opportunities between the east and west, raising questions over the adequacy of Sydney’s planning and the creep of urban sprawl.

Domain Healthy Sydney co-author and senior principal planner at Tract Consultants Adam Terrill said the study “shines a light on why some places are more healthy than others. This is not to say that you can’t lead a healthy lifestyle in a suburb deemed unhealthy, just that its urban environment makes it harder for residents to do this,” he said. “It measures the potential of a suburb to provide a healthy lifestyle, but it doesn’t tell us about the actual health characteristics of the people who live in that suburb.”

The study assigned a star rating to each suburb, with 32 achieving five stars. Alongside Pennant Hills, North Epping also scored top marks, thanks to open space and tree cover, a low density of fast food outlets, good access to hospitals and a high volunteering rate, which was adopted as a metric for social connectivity. Macquarie Park outperformed popular Bondi and Bronte by a long shot, ranking better for access to allied health services, fresh food, open space and tree cover, with residents also more likely to walk or ride a bike as part of their commute.